The original Sellwood Bridge, built in 1925, was the first fixed-span bridge on the lower Willamette River and a pioneer in area bridge technology. Originally intended for the local community, it became a primary connector for eastside residents headed for I-5 and Washington County. More than 30,000 vehicles crossed the bridge daily, severely constraining its capacity and original purpose. Construction of a replacement bridge began in 2011.

Additionally, we removed more than 40,000 tons of contaminated soil, installed 14,250 square feet of anchored wire mesh slope protection—the site sits in the middle of a bowl formed by an ancient landslide—and constructed 4,500 linear feet of new highway and ramps.

The project had numerous phases to minimize impact to the traveling public throughout the three-year construction schedule.

The new bridge was designed to be operational with minor repairable damage through a 500-year earthquake and to withstand a 1000-year event without collapse.

Ridgefield Interchange at I-5 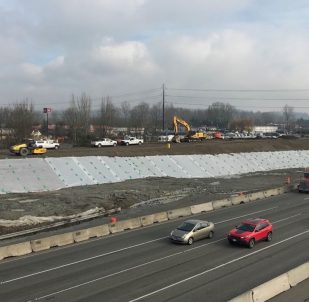 Port of Tacoma and I-5 Interchange