GBI utilized over 200,000 tons of import aggregate for the new ramps, rigid inclusion ground improvements, three different types of retaining walls, including 10,000 square feet of geo-synthetic retaining walls with decorative concrete fascia. It will support the new off-ramp and provide a future bridge abutment for Phase Two of the project. Utility construction included over 10,000 linear feet of storm drain runs, over 2,000 liner feet of new waterline, and over 28,000 linear feet of new conduit for the Joint Utility Trench, which was converted to an underground system as part of the project.

The first Value Engineering Change Proposal GBI introduced was to substitute the specified import embankment material for native material being excavated and off-hauled from a different project less than five miles away. The VECP was approved and GBI imported over 80,000 tons of material for an overall savings of over $725,000.

Since being awarded the project GBI has become involved in sponsoring various events put on by the City of Fife, including their Halloween parade and annual Easter Egg Hunt. 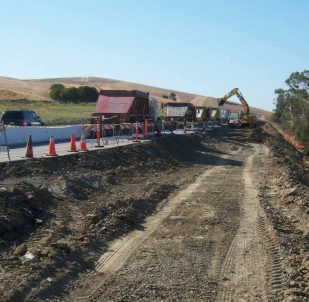