GBI was awarded the contract for The Chase Center, which was behind schedule and had to be ready for the 2019 Golden State Warriors basketball season.

The majority of the work included the excavation and grading early on. But as the project progressed, because of difficulties with their other subcontractors, the client asked GBI to accelerate the schedule so we could assist with other activities, such as off-hauling materials, performing lime-treating operations, and other duties as they came up. Overall, we off-hauled approximately 550,000 tons of contaminated Class 1 soil and Class 2 soil from the site.

GBI also sourced and installed a misting system, power washed the waterproofing, assisted with chipping operations, performed dust control and extensive dewatering, controlled access to the site with traffic control, and performed a variety of other tasks that were not part of our original contract.

Because the client had so many requests that weren’t part of the original project, it allowed us the opportunity to demonstrate our adaptability, the range of the work GBI could perform, and how well we work under the pressure of tight deadlines. 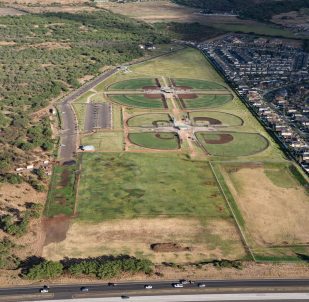