The Willamette Water Supply Program Water Treatment Plant project site is located in Sherwood, a suburb of Portland, Oregon. The project began in April of 2022 and is expected to be completed by June of 2025.

GBI’s scope of work includes site development, drilling and blasting, mass excavation, structural excavation, grading, aggregate processing and crushing, and the construction of retaining walls and site roads. There will be 350,000 CY of drilling and blasting, 280,000 CY of mass excavation and structural excavation, 550,000 tons of crushed aggregates, nine retaining walls, and a 40-foot-tall soil nail and shotcrete wall along an existing public roadway. 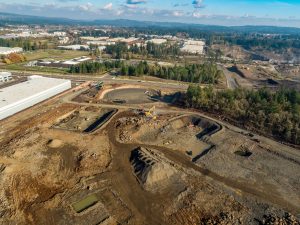 Willamette Water Supply Program is the owner of the project, which is a collaboration among the Tualatin Valley Water District and the cities of Hillsboro and Beaverton. The program was created to oversee a series of construction projects that include an intake pump station from the Willamette River, a water treatment plant, a water reservoir, and more than 20 miles of 84” welded pipe transmission lines to supply water to the various stakeholders.

In short, these projects will create a secondary water source for the greater Portland area that is designed to withstand a 10.0 magnitude earthquake and maintain more than 50 percent functionality immediately afterward. At present, the greater Portland area receives 100 percent of its drinking water from the Bull Run Reservoir located on the east side of the city. However, the area is growing fast, and water demand is projected to drastically increase in the next 10 years—hence the creation of the Willamette Water Supply Program. As the “heart of the project,” the water treatment plant is the largest and most critical component of a 10-year program that has financed and overseen the construction of more than 20 projects collectively worth approximately $1.6 billion.

The intent of the project is to have a secondary water supply system that maintains more than 50 percent functionality following a high-magnitude earthquake. With that in mind, the critical components of the system were strategically placed in earthquake-resistant areas, such as hard rock geologic formations. As one of the most critical components, the water treatment plant was designed to be built on a solid formation of basalt. For this, GBI’s Oregon Region was contracted to do the site mass excavation and grading, the structural excavation, and to drill and blast for all underground utilities on the site. 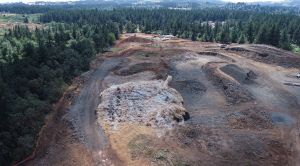 Because little to no excavation or grading can begin without drilling and blasting beforehand, GBI partnered with its sister company, Blasting Technology Inc. (BTI), to assemble a team that can do the work. This marked the first time BTI has come to Oregon to partner with GBI on a project. All of the excavated spoils will be processed through rock crushing and reused as the engineered fill materials for all scopes of work on the project; GBI is managing that aspect of the project.

Given that everything must be drilled and blasted prior to any excavation work taking place, GBI has a unique scheduling challenge. It is especially unique considering the water treatment plant has such a vast network of underground utilities and facilities that must be drilled and shot prior to any other trades moving onsite. GBI and BTI are using a combination of Building Information Modeling (BIM), Trimble Business Center modeling, Paradigm design software, GPS-guided drill rigs, and drone flight topographies to create drill patterns and blast designs that will be submitted to the owner and engineer for review prior to starting the work. The project is estimated to take more than 100 blasts to complete.

At bid and project proposal time, GBI leveraged its relationships with local material suppliers to secure the exclusive use of private property that borders the water treatment plant site. This allowed GBI and Sundt to submit a proposal guaranteeing that no export-import material trucks would use the public roadways or interfere with local traffic—a unique advantage that no other general contractor or civil contractor could deliver to the owner. GBI added further value to the project proposal through its partnership with BTI and by using the latest technology for machine control and modeling. Once again, no other civil contractor could compete with GBI. Additionally, both the GBI and BTI teams have received awards and written recognition from the general contractor and ownership team for their safety culture and for setting a high safety standard on a large project. 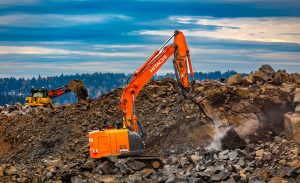 GBI’s Oregon Region also worked with Sundt on the Sellwood Bridge Reconstruction project. Built in 1925, the original Sellwood Bridge was the first-ever fixed-span bridge on the lower Willamette River. Construction of a replacement bridge began in 2011 and was completed in 2017. GBI’s scope of work included excavation, embankment, and support for the bridge’s 18 retaining walls, as well as the removal of more than 40,000 tons of contaminated soil, installation of 14,250 square feet of anchored wire mesh slope protection, and construction of 4,500 LF of new highway and ramps. Today, the now-seismically resilient Sellwood Bridge is a regional lifeline: The new bridge was designed to remain fully operational and accessible to all modes of transportation following a major earthquake. Through the Sellwood Bridge Reconstruction project, GBI developed a relationship with Sundt that helped spark future projects like the Willamette Water Supply Program-Water Treatment Plant.