Despite the challenges of rock-laden terrain, nearby wildfires, and wind-whipped clouds of loose volcanic ash, the Big Island Region’s Waikoloa Solar Project remains firmly on track.

Now under construction on 300 acres in the sun-drenched South Kohala District, the 30 MW solar photovoltaic array and 120 MWh containerized lithium-ion battery storage system will soon comprise the first utility-scale solar farm on Hawai‘i Island. Once complete, it will feed into the island’s electric grid and provide power to local residents and businesses.

And it will also bring Hawai‘i one step closer to a greener future.

In 2008, the state unveiled it plans to reduce its reliance on imported fossil fuel and produce 100 percent of electricity from renewable energy sources by the year 2045. In 2018, the state’s largest supplier of electricity, Hawaiian Electric Companies, issued a request for proposals for renewable energy projects. Through that process, eight projects were selected, including the Waikoloa Solar Project. 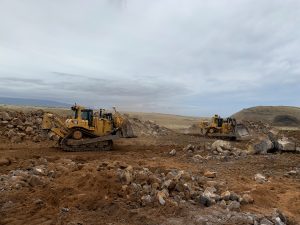 Under a 25-year power purchase agreement, the solar farm is slated to deliver power at $0.08/kWh, one of the lowest rates in the state for renewable energy and far less than the cost of fossil fuel power. It is expected to contribute approximately 7.1 percent of Hawai‘i Island’s energy needs and result in a total avoided fuel consumption of 511,086 barrels of oil over its quarter-century lifespan. At the end of the 25-year period, the solar farm will be decommissioned and the area will be returned to its existing condition.

Construction began in April of 2021 and GBI’s initial portion of work is expected to be completed in October with additional work expected to extend the contract as designs are finalized.

To date, GBI has mass graded over three miles of roads and the substation/switchyard pad, track-walked the site in preparation for pile installation, processed rocks for aggregate, installed drain lines and drainage swales, and prepared the pads for the PCS (power conversion stations). In the weeks to come, GBI will finish the swales, place the road aggregate, excavate and backfill for electrical, and form and pour the PCS concrete pads. 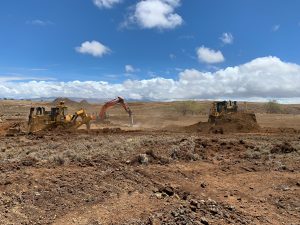 From the very beginning, the GBI project team has provided design assistance and value engineering. Among other things, the team helped the general contractor, Enable Energy, fine-tune the initial scope of work to make it more cost- and time-efficient. The team has also swiftly navigated the obstacles of uneven, ultra-rocky terrain and dusty ash that is near impossible to control with water. Additionally, GBI has paused its work several times to assist local fire crews battling wildfires in neighboring communities; GBI provided its on-site D9 and D10 dozers to help with the firefighting efforts. In spite of the disruptions, the project remains on schedule.

As the Waikoloa Solar Project progresses, the Big Island team continues to build a strong and effective working relationship with Enable Energy, and has opened the door to future opportunities. With this project, GBI is not only doing its part to help Hawai‘i usher in a clean energy future, but is also fulfilling its mission to be the contractor of choice for clients, employees, and the communities in which we live and work.