GBI’s California Region is close to completing work on Oak Knoll, a 183-acre master-planned community located on the grounds of the former Oak Knoll Naval Hospital in Oakland, California.

The site has a storied history. The U.S. Navy built the hospital in 1942 to serve wounded World War II veterans. In 1968, the original hospital buildings were replaced by a modernized 11-story facility to care for Vietnam and Korean War veterans and wounded prisoners of war as they returned home. In 1993, under the Base Realignment and Closure Commission, the hospital was recommended for closure, and three years later, the U.S. Navy vacated the 167-acre property.

The site remained vacant from 1996-2006, and during those years it experienced vandalism and overgrowth to the point of no repair. 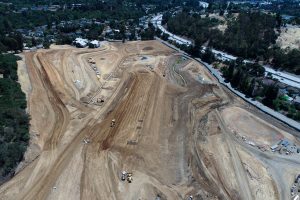 In the mid-2000s, SunCal Development obtained the rights to bid on the distressed property, and alongside a joint venture financial partner Lehman Brothers, purchased the former Naval Hospital site from the Department of the Navy. Their vision to create a planned development won broad public and government support but was put on-hold due to the 2008 recession. After overcoming many financial obstacles in the years following, the project moved forward and SunCal began demolition in 2011. All the buildings on the property were demolished with the lone exception of Club Knoll, the former officers’ club.

Once the site had been demolished and cleared, SunCal’s decade-long vision to create a welcoming community in Oakland’s southern foothills became a reality when the mixed-use development finally broke ground in September 2018. 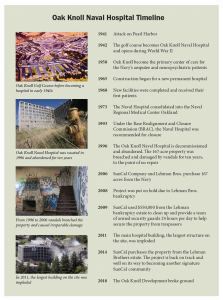 When complete, the Oak Knoll Development will include 918 homes, 80,000 square feet of retail space, and 84 acres of public parks, trails, and open space. There will also be a new community center, a memorial honoring military personnel who served or were treated at the Oak Knoll Naval Hospital, and a newly restored creek flanked by shaded walkways and bike paths. Phase 1 of the project includes 338 new residences, two parks, and two bridges, along with 12,000 newly planted trees.

GBI’s scope of work includes 2.2 million CY of earthwork, the installation of five total miles of wet and dry utilities, and the restoration of a natural creek that was damaged during the development of the Oak Knoll Naval Hospital. Other work includes the relocation of the historic Club Knoll. Some had deemed the building unsalvageable, but City of Oakland officials found a way to maintain the historic building by integrating it into the new Oak Knoll community center. The center will have retail shops, restaurants, and services, and serve as an outdoor gathering place where residents can relax and mingle. The Oak Knoll community will also have striking views of the Bay Area’s breathtaking vistas, as well as the surrounding foothills.

The Oak Knoll project presented a number of challenges, but GBI navigated every hurdle, and the project remains on schedule. As the project nears completion, the California Region is proud to fulfill GBI’s mission on another successful project for our region.