GBI’s California Region is hard at work on the Bickford Ranch project, a master-planned community that will feature 1,890 residential units, public facilities, parks, and open space within a nearly 2,000-acre plan area.

Bickford Ranch is located between the communities of Loomis, Lincoln, Newcastle, and Penryn in the southern portion of Placer County. The elevation varies across the property, from roughly 300 feet above mean sea level to approximately 950 feet above mean sea level. The site has rolling hills, steep terrain and an abundance of oak woodlands, grasslands, and vegetation. The ridge of the property is generally flat and offers views of Folsom Lake, the Sutter Buttes, and the Sierra Nevada Mountain range. 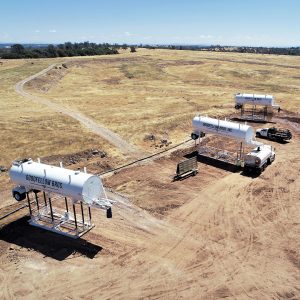 The project has a storied history. Bickford Ranch was once a working cattle ranch owned by its namesake, John Herbert Bickford. A former sheep rancher and fruit orchard operator, Bickford went into the stock and dairy business in 1896. His descendants continued to own and manage the ranch until it was sold in the early 1980s. The property had a lengthy entitlement process that began in the late 1990s and lasted until the early 2000s. The initial developer, Lennar Homes, completed the entitlements with the intention of starting development in the early 2000s. In late 2005, SunCal acquired the property, but three years later, all development ceased and the site was left in various stages of completion and unfinished grading.

In 2012, LV Bickford Ranch LLC acquired the property and proposed a number of revisions to the Bickford Ranch Specific Plan. The revisions included reducing the development footprint by increasing the open space areas while maintaining the originally planned 1,890 residential units. The revisions also called for eliminating a planned 18-hole golf course, high-density residential site, and 10-acre commercial site. GBI has been working with the owner’s team for three years and started grading as soon as the rough grade plans were approved in June of 2021. 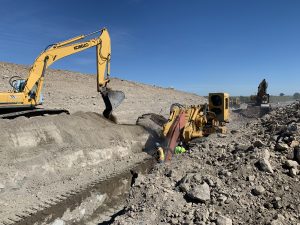 GBI’s scope of work for Phase 1A includes 1.2 million CY of earthwork, grading for 368 pads and 9.5 acres of super pads, placing 68,300 tons of AB and 27,100 tons of AC, and widening Sierra College Boulevard. GBI is also managing eight sub projects, including the installation of 14,800 LF of 18’’ sewer pipe along Highway 193, Sierra College Boulevard, and Bickford Ranch Road; the installation of joint trench, underground utilities, 2,400 LF of 18’’ water line, and a tank and pump station; and the construction of 27 rockery walls totaling 63,000 SF, seven Basalite walls totaling 17,600 SF, and a canal bypass with a 42’’ pipe.

There have been a number of challenges, such as plan changes, working with multiple agencies, working on Mehrten soil (volcanic rock), material shortages, and price increases. Despite the challenges, GBI finished the rough grade for the first phase in April of 2022 and is making strong headway on phase two, currently which includes 1.5 million CY of earthwork. The backbone improvements are scheduled to be completed in the early spring of 2023. As Bickford Ranch progresses, the California Region will continue to uphold GBI’s standards and exemplify our company’s core values through all phases of the project.