Goodfellow Bros. is honored to have worked with Department of Hawaiian Home Lands (DHHL) and O‘ahu-based architectural and engineering firm Bowers & Kubota to successfully complete the Anahola Reservoirs Improvements Project in the district of Anahola, Kaua‘i.

GBI was awarded the project in 2016, but soon after, DHHL and Bowers & Kubota enlisted GBI’s help to redesign and optimize the project to get the most value out of the funding available. After multiple large design changes and a series of negotiations, the project received its Notice to Proceed on June 1, 2020. Five months later, the project team had completed the $1.2 million project ahead of schedule and well under budget.

DHHL has four reservoirs in Anahola that are regulated under the Hawaiʻi Dam and Reservoir Safety Act of 2007; there is also one unregulated reservoir. The reservoirs belong to a larger irrigation system that was once operated by plantations in the area. While DHHL’s core mission is to protect and improve the lives of Native Hawaiians, it also has the kuleana (responsibility) to manage its extensive land trust. The land trust consists of more than 200,000 acres on the islands of Hawai‘i, Maui, Moloka‘i, Lāna‘i, O‘ahu, and Kaua‘i.

GBI’s work at the Lower Anahola Reservoir and the Kealia Field 2 Reservoir was an extension of DHHL’s kuleana and included the decommissioning of both reservoirs to return the surrounding lands closer to its original native state and allow water to flow unimpeded by the now-removed earthen dams. The project included four acres of clearing and grubbing, 22,896 CY of excavation, 22,896 of embankment, 813 SY of geotextile fabric, and 288 CY of rip-rap.

The project drastically improved the safety and future of the Anahola community. 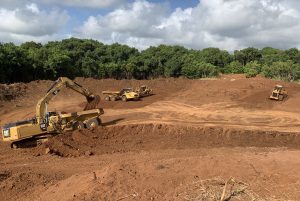 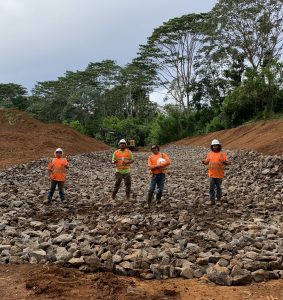 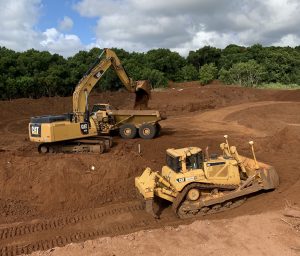