When the first bell rang at Twelve Bridges High School on the morning of August 19, it announced more than the start of a new school year. It also signaled the first chapter in the school’s history.

Located in Lincoln, California, the brand-new high school was completed in June of 2021, just in time for the back-to-school season. GBI started work on the $86 million project in 2019 as a subcontractor for Roseville, California-based general contractor Flint Builders. GBI’s scope of work included all of the site grading and the construction of the school’s parking lots, hardscapes, and turf sports fields. Apart from battling the site’s rock-laden soil, which required the use of a rock-raking machine, GBI’s portion of the project went smoothly from beginning to end.

Today, students fill the hallways and classrooms of the 135,000-square-foot school, which has a 5,000-square-foot administration building, 71,000-square-foot student center (which includes a performing arts center, dining commons, and a gymnasium with support facilities), four modular classroom buildings totaling 51,000 square feet, and an athletic stadium with bleachers and a press box.

GBI also had a hand in the debut of West Park High School, a $122 million state-of-the-art high school in neighboring Roseville. GBI began work on the new school three years ago as a subcontractor for Turner Construction Company. Just like it did for Twelve Bridges High School, GBI completed all of the site grading for West Park High School, as well as the parking lots, hardscapes, and athletic fields.

The project was completed in the spring of 2020 and the results are so impressive that GBI has been asked to host campus tours for administrators from other school districts. The college-style campus is certainly worthy of admiration. Among its many features: A 4,500-seat football stadium, a separate all-weather track and field venue, baseball and lacrosse fields, basketball hardcourts, and two three-story main instruction buildings with reconfigurable classrooms (one of the two buildings has a balcony with a view of the football stadium).

West Park High School and Twelve Bridges High School are just two of the school construction projects GBI has worked on in the Sacramento area. In late 2019, GBI began work on the $50.9 million, 66,000-square-foot Mangini Elementary School in Folsom. Since then, GBI has completed all of the earthwork, along with the school’s hardscapes and playing fields. Now nearing completion, Mangini Elementary School will be the first new school built in Folsom in more than a decade.

For GBI California Regional Vice President John Hovde, these projects amount to more than a job well done. Every time he drives past one of the school campuses, he smiles. “It’s very rewarding to know we’ve done something good for these communities,” he says. “And more importantly, for the kids.” 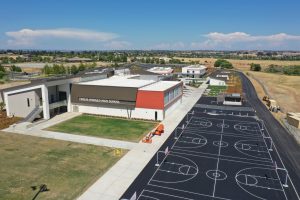 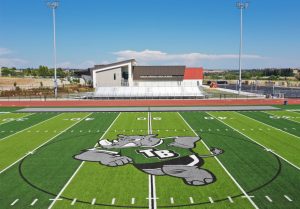 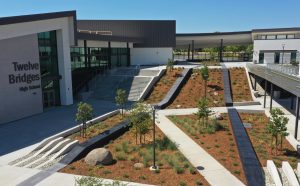